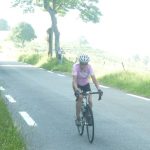 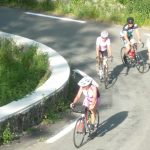 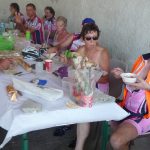 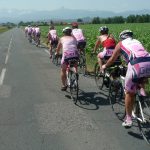 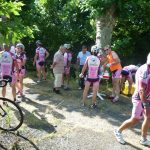 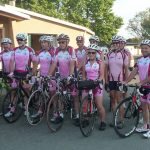 The cycle club had organised a trip to St. Lary in the Pyrenees, a two day event, riding the 135km each way, including a col, the Hourquette d’Ancizan, on the way there, staying the night and riding back over the col d’Aspin the following day. Nick and Maïthé talked me into going and set up a training programme; by the end of June, when we set off on the Saturday morning, I felt quite confident.

It was an eventful ride, with two riders touching wheels halfway there; they both came off, but were fortunately unhurt. The main problem was the heat; it was already well into the 20’s when we left Nogaro at 8am, but surely it would be cooler in the mountains, we thought. By the time we arrived at the lunch stop at St. Marie de Campan at the base of the Hourquette d’Ancizan, it was 41°C, one person had already abandoned and climbed into the support van. Suddenly, over lunch, Laurent started screaming and rolling around on the floor – a pretty severe case of cramp; we got him some salt and he joined Pierre in the van, not starting again till near the top of the col on the Sunday. I managed half the col before giving up; the heat was just too much for me. Gilles, the club president, had stayed with me as I lagged further and further behind the group; when I finally decided that I could go no further, he tried to call the guys in the support van, but had no reception, so he set off up the col so that he could call from the top. I sat and waited, never thinking for a minute that he’d come back down to let me know the van would soon be there to pick me up, as he set off to ride the col a second time! Most of the party suffered from the heat, many of them getting bad cramp. Bruno had a problem with his gears near the top and had to be pulled along by Martine, who rides an electric bike; unfortunately this used up her battery and both of them ended up walking the last part. Bruno called his sister, who came to collect him and took him back to Nogaro.

Sunday was slightly cooler, but still 39°C by late morning. We set off early after a good breakfast and tackled the Col d’Aspin in the relative cool, Laurent joining us near the top. Down in the foothills of the Pyrenees, a familiar figure appeared, in the form of Bruno, who had changed bikes and set off very early that morning from Nogaro to rejoin us, doing more kilometres than anyone else.

As we approached Tarbes, I began to feel a bit strange, as if I were looking at the world through a veil; I gave myself a good talking to and carried on till the lunch stop. I parked my bike and headed towards the tables and chairs, put out by Christian and Jeanneau, our very competent support team; but I never reached them and collapsed in a little heap, a victim of the heat.

People removed my helmet and shoes, poured water over my head and massaged something cool into my feet and I was soon fine again, but my ride was over for the day as I once again joined the guys in the support van.

Everyone else finished day 2 without a problem, the general consensus of everybody involved being that it had been a very good weekend.