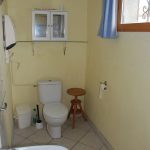 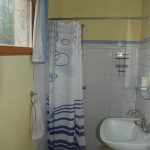 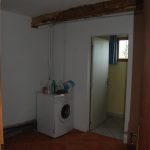 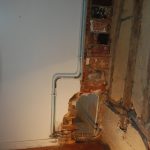 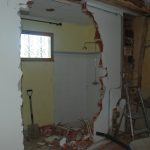 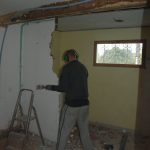 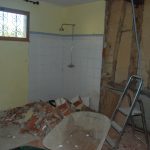 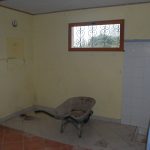 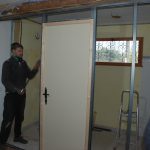 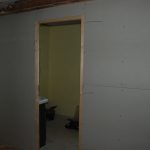 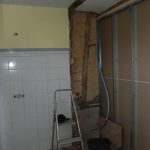 It’s cold at the moment and frequently wet; but the non-gardening season is short here, so we decided it was time to do some serious work on the soon-to-be gite.

The next task on the list was to do a small bathroom remodeling, the least pleasant room in the house; it’s on a north facing wall, so is very cold in winter; it’s narrow and pokey and very much an afterthought, being taken off the side of the débarras (junk/laundry room). We were going to insulate two of the walls, replace the shower and basin, redecorate, etc., but insulating the outer wall would make it even narrower, so Kieran came up with the bright idea of knocking down the internal wall to enlarge the bathroom, a great idea, but a lot more work. The existing plumbing was labyrinthine; the cold water came into the house behind the shower, the pipe then wound its way through the wall, around what used to be a chimney and fireplace, along the wall, up the side of the door, across the top and down the other side, along the floor and round the corner before disappearing through the wall. The hot water did the same, but in reverse! Getting rid of that lot was very appealing.

Nick liked the idea of a suspended toilet, with a cistern hidden behind a false wall, so we bought one, along with a basin, shower, tiles, door and the stuff needed to build a new wall; rails and montants and heaps of plasterboard. The old wall came down and the rubble will be used as hardcore for the campervan hard standing.

We drew plans; it’s going to be so much nicer a space than before, with room for a douche italienne, getting rid of the loathesome shower curtain that always clung to you; the débarras will still be perfectly adequate as a laundry room and we’ll be able to install transluscent fanlights in the top of the wall, allowing light into the débarras, which has always been a bit dark, not having a natural light source. Kieran came over and he and Nick started the reconstruction; there’s a long way to go, but I hope it will be finished for Alex and Graham’s visit at Easter.