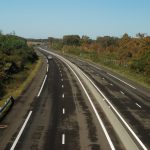 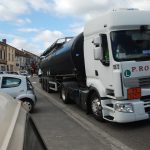 Over 1000 lorries thunder their way through Nogaro’s narrow streets every day, blocking the whole road as they take corners that were designed for horses and carts, not transnational articulated trucks, which save €60 a trip by avoiding the motorway. It’s not just Nogaro that’s had enough; several villages along the route between Auch and Bayonne want to stop the noise and pollution this traffic brings with it.

A protest was organised, so we went along to join the convoy driving at 10kph between Manciet and Nogaro and meeting another group which arrived from the opposite direction, having held up the lorries in both directions. We felt very French, Nick driving the Renault, wearing his Gascon beret. There were journalists at the rendezvous point and even some TV crews;  the maires of the affected villages and officials from the Department, in typical French style, made long, rambling speeches.

The plan is to ban the transnational lorries, forcing them to use the motorway, but apparently such a ban is not legally binding and can be overturned; nor, it seems, is it possible for the government to force the motorway companies to reduce their charges on big vehicles as they’re privately run. So we’re not holding our breath; this being France, this is a problem that will take many years, hundreds of meetings and thousands of civil servants to resolve, generating tons of waste paper in the process as they print everything in triplicate.

Such is the reality of life in France, but if we didn’t have the bureaucracy, what would we have to complain about? The weather has suddenly gone from summer to winter; often the days are still gloriously sunny, but as soon as the sun begins to drop, the temperature plummets and we’ve had frosts for the last few nights.

For the last six winters, I’ve dreaded the cold weather as our only heating was a wood burning stove in the kitchen. Getting up in the morning, the first job was to go out, either to collect or to chop wood to light the fire and although the kitchen was toasty within a few hours, the rest of the house was cool, to say the least.

Now, however, in the new house, we have underfloor central heating; I think I must have died and gone to heaven – stepping out of bed or the shower, the tiles underfoot are warm to the touch and the whole house is deliciously toasty. I’ve even thrown out the mangy, but warm, quilted man’s cardigan that I’ve lived in for the last 6 winters!

A student arrived one morning this week for her English class; Nick let her in and I heard her say “oh Nick, you’ve got knackered feet”. We both howled with laughter, to her total bemusement, before I explained to her how we pronounce “naked” in English. 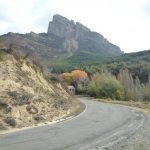 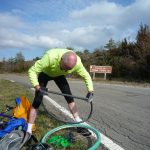 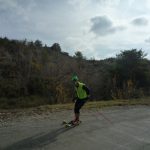 Not just for cyclists 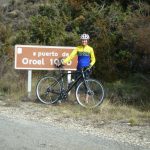 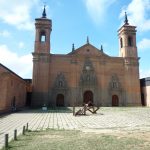 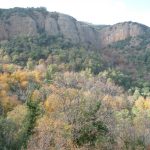 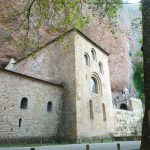 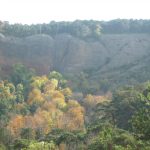 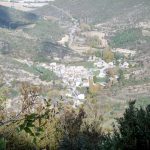 Santa Cruz, from the monastery 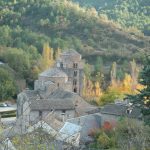 The church in Santa Cruz 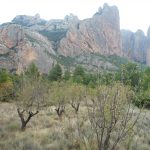 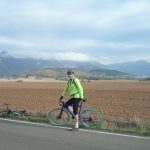 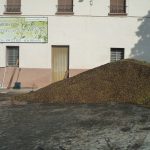 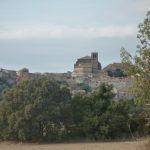 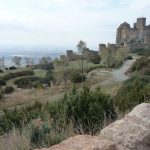 It being half term and two of my students having cancelled their lessons for the week, it seemed an ideal opportunity to head off in the camper van. I wanted to practice my Spanish, so we set off for Jaca, not far over the border and from where we’d heard tell of a monastery built into a cliff face, within cycling distance. We wouldn’t be doing any serious riding, so we didn’t take our best bikes; it always feels a bit risky leaving them locked to the back of the van.

We arrived in Jaca on Halloween; every child in the town, and several of their mums, must have been out, dressed up and faces painted; all the shopkeepers had huge buckets of sweets for those doing “trick or treat”, it was so good natured and fun. Even the waitresses at the restaurant where we had dinner were dressed up.

The next morning we set off for the monastery; not long into the ride, the road turned up hill. It went up, and up…….. and up…….. till at last we reached the sign for the Puerto de Oroel, a mountain pass at 1080 metres (how had Nick not spotted that on the map!). And still it went up, to the new monastery on the top, from where we started dropping to the old monastery, which is amazing, and is indeed built into the face of a huge, overhanging cliff.We couldn’t get decent photos because of all the trees around, but there are some good photos at

I was really pleased when two groups of Spanish stopped me to ask if I’d really ridden all the way up there; more pleased that I understood what they’d said and that I could reply, than anything else, if I’m honest. The village of Santa Cruz de la Seros was at the bottom of the valley, so we set off there for a lovely lunch, really pleased that we’d done the ride this way round; the descent was so steep, I’d never have been able to ride up that!

The following day we went to Huesca, from where we thought we’d ride to the Castillo de Loarre about 35km away and a mostly flat ride. All went well till we reached the village of Bolea, about halfway; the village was a labyrinth with not a road sign in sight. We took a right turn that seemed to be heading in the right direction, but which soon petered out into dirt track, it was apparently the footpath for the pilgrimage of St Jacques de Compostelle. So back into the village centre, where I asked a man; “down there and turn right”, he said, but that was where we’d come from so I asked another; “right here, then left”. Better get a concensus, so I asked someone else; “I’m not from around here, you’d better ask in the bar”, which I did. Three locals all shook their heads when I said, with a lot of mime when I ran out of vocabulary, that we’d found the camino de St Jacques, but wanted a proper road to Loarre; “no, there isn’t one; if you want to see the castle, you have to take the track”. This seemed a little unlikely as there was a road, with a number, on our map; but my Spanish certainly isn’t good enough to argue. I reported back to Nick and we’d almost decided to head back to Huesca when we spotted a town map on a wall; clearly marked was a road to Loarre. My three friends from the bar were walking up the road; “look, this is the road we’re looking for” I said, pointing to the map. More shaking of heads; “no, it doesn’t exist any more, you have to take the track”. Unconvinced, we followed the map; there was a perfectly good road all the way to Loarre and if we hadn’t taken the first right turn, we’d have found it, no problem; but i wouldn’t have had as much Spanish practice!

The last 4km to the castle were steeply uphill; I really wished I’d taken a lighter bike with lower gears, but arriving at the top it was worth every minute; the castle was stunning and the views fantastic, as we sat in the sunshine, feasting on our picnic of tortilla followed by sheep’s cheese and what was called date and walnut loaf – a 10cm circle, about 2cm thick, of neat dates and walnuts, squashed together – delicious!

We sampled a couple of tapas bars in Huesca, they were superb, then loaded the van up with olive oil, brandy, wine, oranges and more date and walnut loaf, before heading home. It was only four days, but felt like a real break.