It’s just too wet to do any work outside at the moment; walking to the compost heap without slipping and falling flat on your face in the mud is an achievement! But there’s no shortage of inside jobs to be getting on with; tiling and joint filling come high on the list of priorities.

The heating man returned yesterday to install the water heater; a ballon thermodynamique, it works on the same basis as our central heating system, taking calories from the air and using them to heat water; it claims to use 70% less electricity than a conventional water heater. We can’t connect it or try it out as we don’t have electricity in the new house yet, though the electrician has promised to return soon, to hook it all up. We need to finish tiling the floor in the chaufferie and fill and paint the walls before the heating man comes back to install the pompe à chaleur (heat exchange pump for the central heating) in a couple of weeks.

Inside, the floor is now hard enough to walk on, though we must wait several more weeks, until it’s thoroughly dry, before we can start the tiling.  They don’t plaster over plasterboard here, just fill the joints and screw holes. Looking around, it seems a mammoth task; supposedly my job, but as I’m teaching three days a week, Nick’s offered to help.

It’s not all work though; we’re going to see an English film on at the cinema (subtitled in French) tonight and the band is playing our first gig of 2014 at a bar in Riscle tomorrow night. 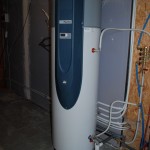 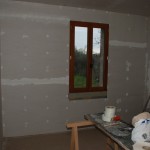 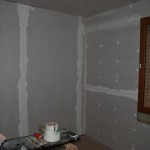 It had been the kind of day that never really gets light. The kind of day when the sky hung heavy and dark, so low that you felt you could reach up and touch its cold dampness. The rain never stopped, occasionally interspersed with stinging showers of hail. The sort of day that made you feel that all you wanted to do was curl up by a log fire with a mug of hot chocolate and a good book.

The rivers running through nearby towns had already burst their banks, flooding car parks and camp sites, rushing along in swirling brown torrents, taking tree branches and anything else they could find in their wake, and flooding was making many roads impassable.

By the time we went to bed the wind was howling, whistling down the chimney and lashing the rain against the shutters. There are no street lights here and there was no sign of the moon or stars, so the night was as black as pitch, as we listened to the unaccustomed sounds of things being picked up and hurled around the garden. I woke about 2am; the bedroom door was rattling, so I found a “sausage” to put across the bottom of the door that leads into the rear part of the house, as yet un-wind-proofed. I wondered what damage we’d find in the morning.

It was still dark when another noise woke me; I came to, trying unsuccessfully to identify the sound. The door was rattling again, but this time it sounded different, as if there was some kind of force behind it and then the noise came again,  ………Hugo miaowing for his breakfast and head-butting the door!

If anybody out there has missed me, I’m sorry for the absence. After a week of fighting my back ache, I found an osteopath who would return my call and see me the following day; she contorted me and tied me in knots and left me feeling worse than before. No wonder she could see me so quickly! I’m now recovering from her less-than-tender ministrations and have taken her name off my list.

Nick, however, has been busy. The room that will, one day, be my work room is now plasterboarded, as is the entrance hall; he’s also tiled the chaufferie floor where the water heater is going.

Olivier has put down the chape liquide, so in a few weeks, when it’s completely dry, we’ll (and I hope that will include me!) be able to start tiling the house floors.

We were very impressed when the tile shop phoned, on time, to say our tiles had arrived. The big square tiles had arrived, the small square tiles had arrived, but where were the rectangular tiles? They’ll be here on Friday, they said; so I phoned on Friday, but there were no tiles for us. Ring Pau, they said, the shop where we placed the order; so I did, but no-one knew anything; the man who took the order would ring me back……. but he didn’t. It was beginning to feel very South-West France-ish. Then this morning the man from Pau rang to say our rectangular tiles hadn’t left Italy till a week after the rest, so they’d be here next week……… Five minutes later the Mont de Marsan shop rang; “Your tiles are here”. There’s no point fighting it, it’s just the way things are! 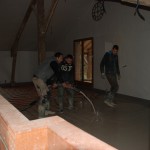 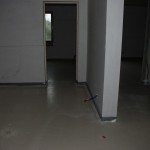 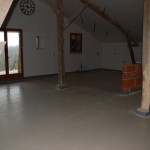 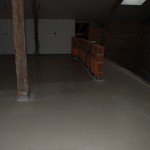 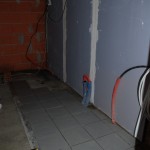 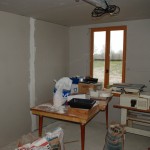 Nick and I went to London for a few days last week; mainly to visit the Paul Klee exhibition at Tate Modern, but also to do a bit of shopping in the sales.

The exhibition was fantastic; I have loads of ideas for quilts inspired by his work now. When our new house is finished and we start letting the house we currently live in as a gite, we intend to decorate the bedrooms on the themes of artists, one of them being Paul Klee. We also managed a couple of hours visiting the surrealist exhibition; again, we loved it.

We bought a few things in the sales, as well as plenty of fabrics to make quilts; we had taken as little as possible with us, but, no matter how we tried, we couldn’t pack all our purchases , including my new coat, into the two small cabin bags we’d taken. So I travelled home in two thick sweaters, jeans under my skirt, and wore both my coats; I was certainly warm enough and felt like the Michelin man!

Unfortunately, all the travelling took its toll on my back, so I’m having to take things very gently this week, hence the lack of a blog for a while. 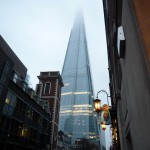 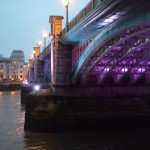 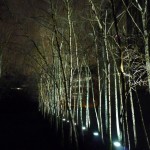 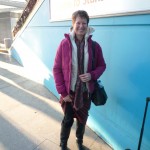 Christmas is over, so it’s back to the grind. We’d like to get the chaufferie floor tiled before the heating man comes back to install the stuff in there, so it had to be emptied. As they will live upstairs, the obvious place to put the cooker and fridge, weighing 130 and 150kg respectively, is upstairs, but we don’t have stairs at the moment. So Nick and Kieran rigged up a system to move them, using ladders, ratchet straps and a lot of brute strength, with me to position the wedges. It was a relief when we’d finished; now they’ve done the chape on the floor, when it’s dry we can tile it.

At the gite owned by the cycle club, they’re putting up an extension, but to keep costs down, club members are helping. Nick was asked to help Richard hang a door today; he said he wouldn’t be long, but………..  2 hours later, he returned, delighted to have discovered that Richard, a retired menuisier (carpenter), has a massive workshop, with huge planers, band saws and all the other boys’ toys that Nick hankers after. I suspect he might be going round there to play quite often. 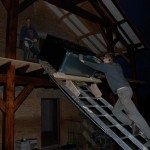 Going up; the cooker 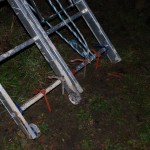 To make sure the ladders didn’t slip 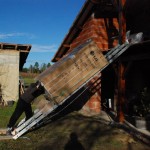 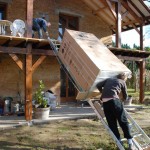 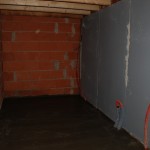 Looking back over recent posts on my blog, there seem to be quite a lot of pictures of people eating! I’m afraid that it’s just one of the penalties of living here; food is very important to people, as it sharing a good meal with friends.

New Year’s Eve was no exception to this general rule. The cycle club was holding its annual reveillon, so we went along. It was a smaller affair than the Caupenne one of the last two years, but 34 people, cyclists and non-cyclists alike, had booked in. Jeanneau, who cooks for the monthly dinners, did us proud, with a seafood starter, comprising huge plates of oysters, king prawns, bulots (sea snails?) and clams; I’m not a fan of seafood, but managed a few oysters and a couple of prawns that Nick prepared for me; however, one clam was more than enough and I got as far as extracting a bulot from its shell before deciding there was no way that was going in my mouth! The next course was avocado with tuna mayonnaise, followed by ris de veau in a mushroom sauce, then a trou Gascon, a lemon sorbet served in white armagnac, to refresh the palate. By the time we got this far, it was fast approaching midnight, so there was a break before we tackled the main course of quail wrapped in bacon. As midnight struck, so the kissing started; everybody had to kiss everybody else on both cheeks, blokes included. It got to the stage of being difficult to remember who you’d kissed and who you hadn’t! Midnight out of the way, it was back to the serious task of eating; the main course was followed by cheese and salad, then omelette Norvegienne (baked Alaska), coffee and armagnac. A good job the meal was spread over 4 hours!

Our French has improved enormously since we arrived here and I’m frequently asked to translate for Philippa, another English cyclist. We were doing quite well, having discussed the antics of Gerard Depardieu, France’s answer to Oliver Reed and who, I read recently, “is affectionately known as Gégé”. Well I don’t know which Frenchman the journalist asked, I’ve yet to meet a French man or woman who regards him with anything other than utter contempt! But we came unstuck when Joseph started to talk about his favourite films, starring somebody whose name sounded like Low-ray-lardy. He couldn’t believe we’d never heard of this megastar and the discussion soon developed into an impromptu game of charades, until the penny finally dropped – Laurel and Hardy! 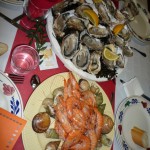 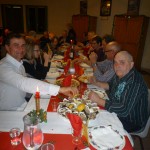 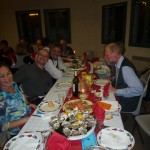 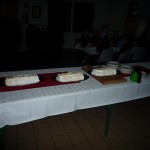