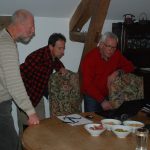 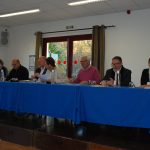 The date of the cycle club AGM was looming; this would be Nick’s first speech as secretary and he wanted to be well prepared. For the previous 5 weeks he’d thought of little else. He sat in front of the laptop night after night, typing a little and contemplating a lot; he wanted to get it right.

Gilles, the president, and Jacques, the treasurer came round to help; they approved of what he was going to say and helped correct our less than perfect French. Finally, it could be printed out.

Nick’s was the second speech of the meeting, so he got it out of the way early. He did brilliantly, with hardly a mispronunciation and afterwards everybody congratulated him; they obviously realised how difficult it had been, but he rose to the challenge and it was greatly appreciated. 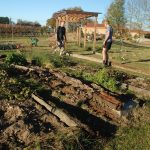 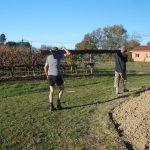 Dom had to borrow shorts, the weather was so good! 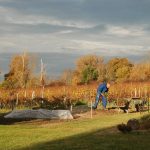 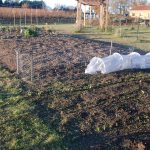 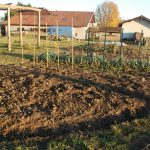 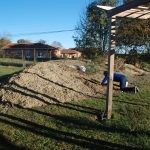 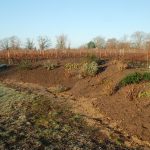 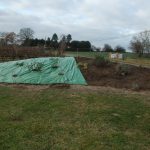 Having read my blog about our helpxers, our friends from Skipton decided they would like to help too; could they come down for a week’s working holiday? Hardly an offer we could refuse!

A few phone calls to discuss likely weather conditions and possible projects and it was sorted. We had selected some outdoor and some indoor jobs, so were ready for whatever weather arrived.

In the event, it couldn’t have been better, so we could work on the garden. Nick and Dom removed turf, added compost and manure, dug and rotovated and moved the soft fruits in order to make a big, new potager, instead of several small ones. Maddy and I weeded the banking; after the rain of the previous week we could remove the roots that had been inaccessible to the helpxers. We also started weeding the oldest potager, between the garage and the abri, in order to use the decent soil from there to improve the banking, which is solid clay, dug out when the septic tank was installed. We want to make hard standing for the camper van on the old potager, so this served two purposes.

Between all the hard work, we found time to go to a craft fair and a Spanish meal and while Nick and I were at the cycle club AGM, Maddy and Dom had a day out in the Pyrenees. I think they were tired by the end of the week, but it was very enjoyable, not to say productive.

Since they left, work has inevitably slowed down, in part due to wet weather, but we’ve finished moving the soil, hundreds of barrow loads, and have got half the banking covered in plastic, to keep the weeds down. We had hoped to finish for Christmas, but I’m now streaming with cold, so it’s looking unlikely. Nick’s also moved the artichokes to their new home and we’ve planted more climbers on the pergola; hopefully next year the garden will start to look less like a building site.