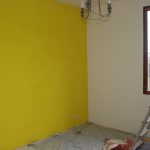 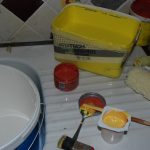 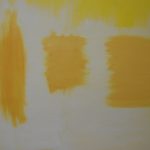 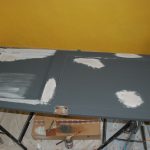 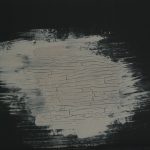 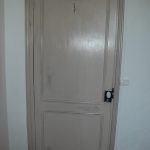 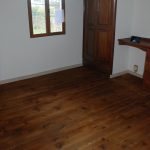 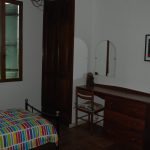 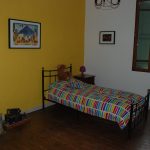 As part of the renovations of the gite, I decided to redecorate one of the bedrooms. Eventually each bedroom will be decorated on the theme of an artist and we’ve chosen Paul Klee for this one. I could have just given it a quick coat of emulsion, as was suggested by several friends, but never one to make life easy for myself, I took a different course.

We found some IKEA furniture in unfinished wood that I could varnish to match the built in wardrobe, bought a tin of yellow emulsion for one wall, Nick made skirting boards to cover the tatty join between walls and floors, repaired the wardrobe and we ordered some Klee prints.

I painted most of the room white, then did the yellow wall. I stood back to admire my work; it was the most vile colour – hi-viz yellow! That wouldn’t work! So I mixed it with a bit of white and a bit of terracotta and finally got the sunflower yellow I wanted.

Matching the varnish on the wardrobe was no easier, requiring another mixture of various pots to get the right colour, but eventually I got there and varnished the IKEA furniture, part of which Nick had by now altered to make a dressing table.

Then came the fun bit; I didn’t want plain white doors and woodwork. I knew how to do a distressed finish, but wanted some crackled paint too; how I love YouTube – you can learn anything, from felting to how to play the guitar accompaniment to a song, to how to do a crackle effect on paintwork.

I set to work. The door had obviously last been painted before the availability of non drip paint and was a real mess. I sanded it, then applied primer and two coats of dark grey emulsion and rubbed the edges and “worn” sections with a candle so the next layers of paint would be easy to remove. I then liberally applied PVA glue to the bits I wanted to crackle, waited till it went tacky and painted the cream emulsion over the top, taking care not to disturb the PVA; next I attacked it with a hot air gun and like magic, cracks began to appear. Three coats of the cream over the rest of the door and it was ready for distressing; I rubbed the cream off the waxed edges and finally gave it a coat of clear varnish. Then I went through the same process for the skirtings; I have to say I’m really please with the results, even if it was a bit time consuming.

I cleaned, woodworm treated and waxed the old wooden floorboards, spray painted the light fitting, we hung the posters and put together one of the twin beds. The second bed, having been posted with the first, courtesy of DPD, still hasn’t arrived and Graham, as the sender, is in dispute with the company. Fortunately he bought insurance, but this doesn’t seem to be a lot of help as it’s now 6 weeks since the first bed arrived and very little progress seems to have been made. Very frustrating!

One day I’ll make quilts for both beds on a Paul Klee theme, but for now what we’ve got will have to suffice.

We’ve spent the last week cleaning (more here about perfect cleaning) and sorting what looked like a bomb site and finally, the gite is beginning to look habitable, just in time for the family’s Easter visit. 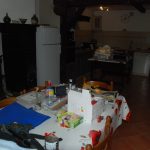 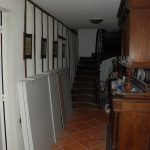 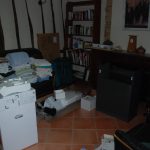 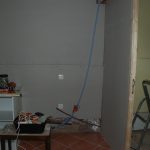 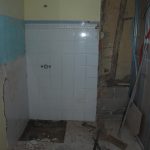 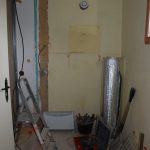 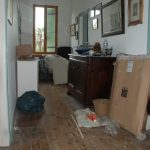 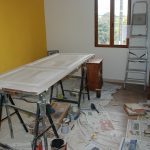 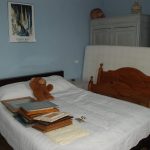 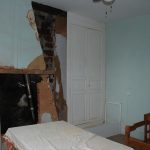 In less than 2 weeks you’ll arrive here to spend the Easter holidays with us. You know how much we look forward to your visit and that we try to make your stay as comfortable as possible, being well aware that, where tidiness is concerned, you and Nick are at opposite ends of the spectrum.

Do you remember last year’s visit, when you had a look around and announced that you’d never seen the place so clean? Well, hang on to that memory; there’s no chance of it being reinforced this year!

We’ve been rather over ambitious in what we thought we could achieve over the last few weeks; there’s still a huge hole in the chimney breast in Immy’s room as, in spite of their best efforts, Nick and Kieran have so far been unable to fit two flues in the chimney, meaning that the wood burner in the gite kitchen can’t be used, though I’m still hoping this will be sorted before your arrival as the weather’s unseasonably cool at the moment.

Being bored with twiddling my thumbs (as if!!!), I decided to redecorate Izzy’s bedroom. Yes, I suppose a quick coat of emulsion would have tidied it up, but you know me – if there’s a more complicated way of doing something, that’s the route I’ll take. Having worked on it for the last two weeks, I’m nearly done, so one room should look good.

Then, rather than just renovate the downstairs bathroom, we thought it better to knock down the wall between it and the débarras to enlarge the bathroom. It seemed like a good idea at the time and on paper, finishing it looked possible, but it’s still an empty shell. Don’t worry though; the other bathroom just needs a good clean and Nick’s still hoping to reinstall the washing machine in the débarras.

Speaking of cleaning; having emptied four rooms into the rest of the house, there’s stuff everywhere. Your bedroom is full of spare beds and mattresses and the bed is covered in paintings; the landing is only passable with great care, as it now houses furniture from the other bedrooms, dust sheets, pots of paint and varnish as well as numerous tools, power and otherwise. The sitting room is currently home to all the towels, sheets, etc. from the cupboard in the débarras, along with almost everything we’ve bought for the new bathroom; shower, basin, toilet, cupboard, tiles…. You can get in there to open the shutters, but only just! And as for the kitchen – well there’s a bit of everything in there, including the shower screen.

Between demolition and sanding, you’ll understand that we’ve produced not a small quantity of dust, which is piling up nicely on every surface.

So please be warned; it will be as clean and tidy as I can make it, but I’ve never been known as much of a domestic goddess!

Love from your rather harassed, slightly panicking mother in law.