The walking club hike being Saturday this weekend, there was no walk today; so Nick suggested I join him on a big organised ride around Lectoure, at the eastern end of the Ger, the “route du melon”. There was a choice of three routes of 35, 55 or 74 km, so I opted for the middle one and assumed Nick would do the long one. We left home at 6.30, in order to get to Lectoure early enough to miss the worst of the day’s heat;  though cloudy and cooler than recently, it was still about 23°C and very heavy as we set off at 8.30.

It’s the first time we’ve been to that part of the Gers; it’s very pretty and Lectoure itself was buzzing with life, but it’s also very hilly. We both ended up doing the 55km ride as the heat was quite oppressive, making every hill seem steeper than it really was and by the end my legs felt like lumps of jelly. Even Nick said he’d found it a hard ride!

But we met lots of folk who were at last year’s cyclotourisme week in Auch and the sausage sandwiches and fresh melon at the feed station partway round were very welcome. No photos, sorry! 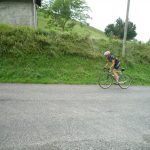 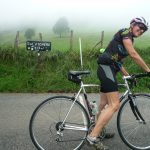 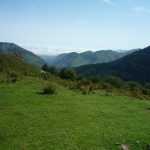 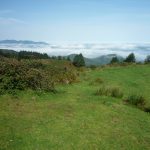 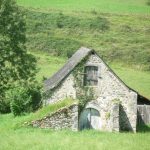 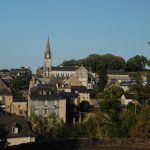 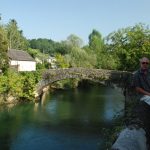 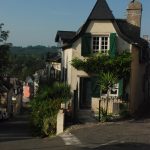 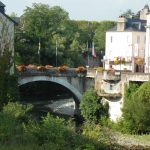 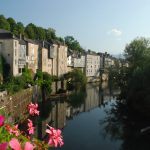 Maybe it was a mistake, doing a col with Maddy; Nick now seems determined that I should regain the fitness I had 10 years ago as quickly as possible and with that aim in mind, is finding as many hills as he can to drag me up. It’s a very different experience riding with Nick from riding with Maddy; he has the sort of gears that simply won’t allow him to ride uphill at my pace, whereas Maddy’s gears are lower than mine, allowing us to potter at a very gentle pace. Nick’s very good though, waiting for me at the top of every hill with words of encouragement, if not quite long enough to recover from my efforts.

So when a big club ride into the Pyrenees, organised by Maithé and Pierre, had to be cancelled due to storms being forecast that weekend, Nick decided we’d go early to beat the weather; we could still visit Maithé and Pierre at his family’s home and his birthplace, a ride of around 55km, over two “little” cols. We set off on Tuesday, parking the camper at Arette. The forecasts aren’t very accurate here and we had a big storm that night, leaving the roads soaked on Wednesday morning and the clouds well down on the mountains. As Maithé and Pierre wouldn’t be around on Thursday and we had to leave on Friday, that only left Wednesday afternoon to visit them. There wasn’t time to do our planned warm up on the flat, so we set straight off; the first col (col de Lie) started 500m out of the village and had some quite steep sections, Nick flew up it and I eventually plodded my way to the top, promising myself all the way that I was going straight back to the camper from the top, but once there, somehow I got talked into continuing. The second one (col d’Ichère) was longer, but felt less difficult. What we didn’t know was that Pierre’s house is partway up another col, the bottom section of which, as far as his house, is truly savage. I thought I’d never make it and had to stop and hang over the handlebars for a few minutes shortly before we reached the house.

But what a welcome we received on our arrival! All Pierre’s family was there and keen to give us a guided tour of their childhood home and feed us drinks, bananas and cakes before we headed home for the return trip under leaden skies.

We took a flatter route home as I wouldn’t have made it otherwise and treated ourselves to a lovely dinner at the local restaurant.

The following day Nick went out again, doing another four cols along a 75km route as I took the easy option of the village museum.

On the way home we stopped for a night at Oloron Ste Marie, a town made up of three ancient villages, all built on steep hilltops and united during the time of the Musketeers by Captain Treville. Definitely somewhere worth another trip. 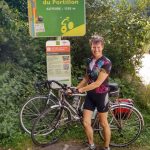 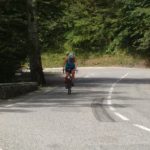 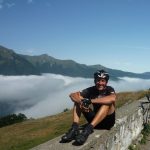 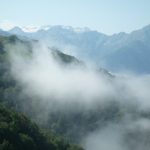 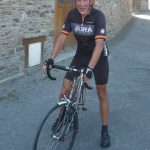 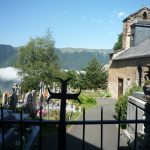 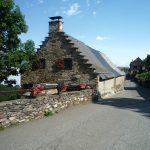 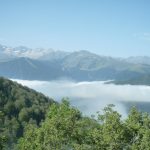 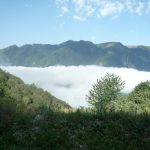 On Sunday there was a big ride organised by the Bagnères de Luchon cycle club; you could choose to ride as many, or as few, as you wanted, of six Pyrenean cols around the town. When we heard that our cycling friends from Skipton would be arriving the previous Thursday to stay for a few days, the obvious question was how many cols they wanted to do. Nick and Dom signed up, but as I’ve only just got back into cycling,after a ten year break, for health reasons, I was apprehensive about taking on too much, too soon. Maddy was happy to stay with me, to attempt just one col (the easiest) and just see how I went.

The monthly cycle club dinner was on Friday evening, a great opportunity for Maddy and Dom to meet the cycle club, as well as for the club to meet our friends, about whom they’ve heard so much.

We arrived at the camp site in Bagnères de Luchon on Saturday evening, dining on mountains of pasta in preparation for the big day ahead; I wasn’t at all sure I’d be up to the challenge after so long off the bike.

Nick and Dom set off at 7am on Sunday, meeting Francis from the Nogaro club at the start; it was a glorious morning. Of the six cols, port de Bales, Peyresourde, col de Portillon, Hospice de France, Superbagneres and Artigues, Dom managed three and Nick and Francis four. They celebrated with well earned beers in the town that evening.

Maddy and I had a more leisurely start, gently rolling out to attempt the col de Portillon at 10am, not the best idea as it was already getting quite warm. Just a couple of km into the col, it was really steep for a while; this wasn’t what it said in the description in Nick’s book! The steep bit was meant to come nearer the finish. At this rate, I would have no hope of completing it. But for whatever reason, that was the worst part; maybe I rode myself in or something, and it wasn’t too long before we arrived at the summit, very pleased with ourselves. I’m not sure I’d have done it though, without Maddy pacing me as I puffed and panted my way up the hill.

We were in no rush to get home, the garden would survive another day, so on the Monday Nick and Dom did another col, then joined Maddy and I at the end of the vallée du Lys, not a col, but à 12km climb nevertheless. We enjoyed our lunch at a little cafe at the top after a walk to look at the Cascade de l’enfer (hell’s waterfall).

A very enjoyable weekend, then home to water the garden.