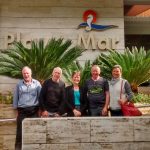 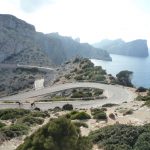 The road to the lighthouse 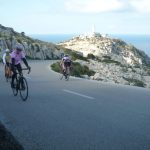 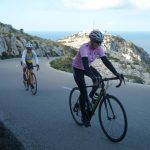 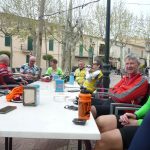 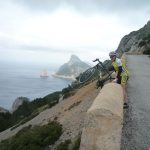 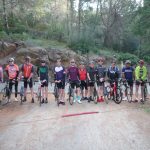 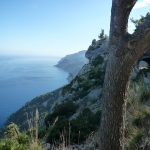 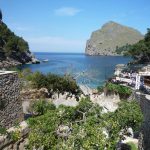 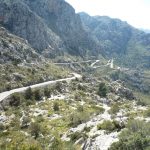 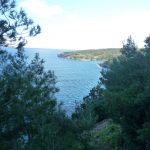 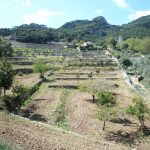 For the last few years, Nick has joined some friends on a week’s cycling holiday in Mallorca; he’s always raved about how good the cycling is, how beautiful the scenery and how amazing the food in the hotel. While I couldn’t cycle it seemed pointless my going, but this year I decided to give it a try, along with our friend Ian, who lives in the Pyrenees and Francis and Regine, a couple of French friends from the cycling club.

The weather was perfect, dry and not too hot and as there are up to five guided rides a day, all at different levels of fitness, there was something for everyone.

The first day we did a short, warm-up ride out to the lighthouse at Formentor; the views were every bit as breathtaking as Nick had promised, with azure waters around every bend.

We did some rides with the guides, most of whom are ex-professional cyclists; Nick and Francis joined the group being taken by car to the other end of the island one morning and cycling back along the mountain ridge, about 150km with, obviously, plenty of climbing. We met some lovely people while we were there and one day a group of nine of us decided to do sa Calobra, one of Nick’s “must do” list for me and described as being “a perfect col”, with a steady gradient of 10% for almost the whole of its 12km. It’s an upside down col, as you start at the top, descend to the sea and then climb out, so it’s quite committing. I found the start of the descent terrifying, with tight hairpin bends and loads of buses, but, having made it to the bottom, managed the climb back up without too many problems and even beat two of the guys in our group to the top (one of whom has sinced explained to me the concept of being “chicked”: being beaten up a hill by a woman). A total of 110km and 2320m of climbing for the day, I was nearly too tired to eat dinner that evening.

The hotel was as good as Nick had said and the buffet style restaurant was superb, especially for hungry cyclists. There was a spa and an indoor pool and the staff were lovely, allowing me to practice my Spanish on them. Regine and I had a day off to take the bus to Alcudia, where we spent the day exploring on foot, a welcome break from the saddle for me. I’ll probably go back again, though I’ll take my own saddle in future, the one on the hired bike felt like sitting on razor blades!