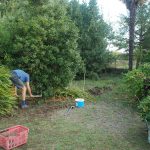 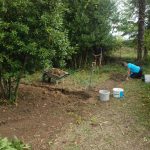 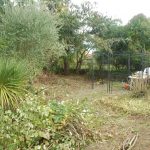 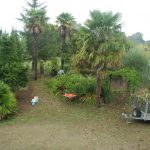 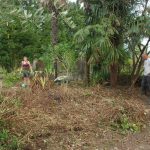 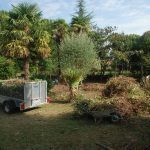 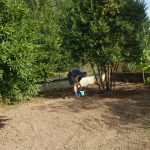 Our friends Maddy and Dom came over in 2017 for a week’s working holiday. And just to prove their insanity, asked if they could do the same last autumn! We were hardly going to turn down such an offer, so Nick went to pick them up from the airport.

This time, their challenge was the gîte garden; it’s been pretty much neglected since we moved in and was totally overgrown. Nick and I just didn’t know where to start, so the week with Maddy and Dom, who, unlike us, are “real” gardeners, was exactly what we needed.

I was mostly on domestic tasks, keeping the troops fed and watered, but the rest of them worked solidly from morning to night, digging out brambles and honeysuckle, mimosa and pyracantha, pruning the huge bay trees that were threatening the electricity cables and unearthing hundreds of bulbs, whose existence we weren’t even aware of, hidden as they were in the dense undergrowth. Day by day, a garden started to appear.

One of the big discoveries was that of at least one oval flower bed, surrounded by Victorian looking edging tiles; this was cleaned and weeded and by the end of the week, ready to plant. There may well be another similar on to the other side of the path.

In total we filled, jumped on and refilled the trailer seven times; the man at the tip was sick of the sight of us. Once they left, Nick and I continued the work, removing the rest of the pyracantha from the wall by the roadside, digging out the remaining tree stumps and planting up the oval bed, by which time, winter had arrived, so we had a good excuse to take a break from gardening.

The plan had been to finish the gîte garden by the end of November, then concentrate our efforts on the interior of the gîte during the winter, but, as usual, these things take longer than planned. Our thanks, however, must go to Maddy and Dom, without whom we would still be looking at a jungle.