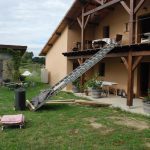 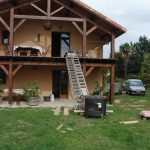 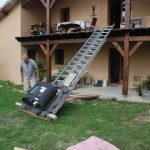 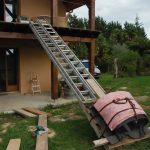 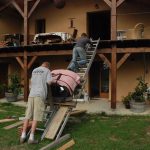 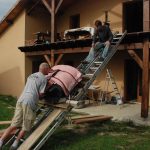 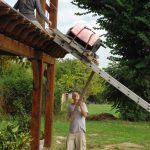 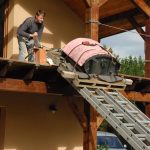 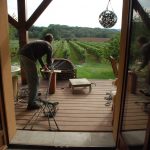 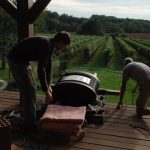 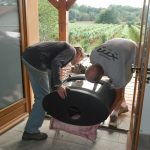 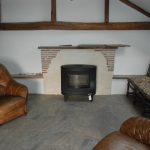 It seems so long ago that Nick suggested we design our new house upside down; it was so long ago. His reasoning was good; the interesting architecture is upstairs, the views are better from upstairs and the bedrooms will stay cooler in the summer.

What we didn’t take into account was the difficulty of getting such small, lightweight items as kitchen units, a large fridge or a range cooker onto the first floor. Nor the 152kg of woodburner that we bought a couple of weeks ago and which lived for a while on the terrace, until Kieran could come over to help move it.

The digger being out on loan, using that wasn’t an option; nor could they use the electric winch because of the overhang of the balcony; so ingenuity and brute strength came into play. They removed any parts they could, put up two ladders, side by side and wrapped the stove carefully in blankets before strapping it to a pallet. They attached a hand cranked winch as far as possible up the ladders, it only has about a metre of wire, then one winched while the other pushed. They used chocks and wooden beams to stop the stove sliding back down while the winch was reattached to the ladders higher up. That worked well till they reached the top of the ladders, but how to get it the last bit of the way? After a bit of head scratching, they removed the back planks from the balcony so they could tie ropes to the beams below, took the wire over a briquette and a beam to give it the required height and finally it arrived. Getting it from there to the fireplace was a doddle after the previous two hours’ nerve wracking hard labour.

Now all it needs is plumbing in; but Nick wants to rebuild the entire chimney, from bottom to top, first. I think it could be a very cold winter!